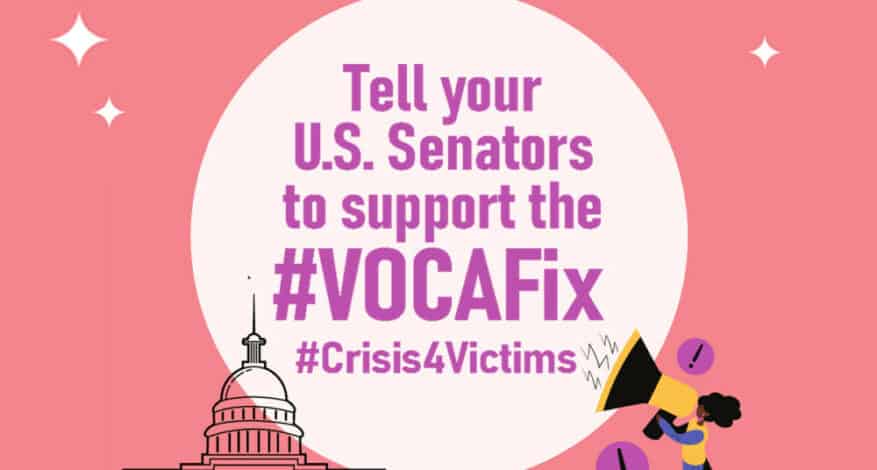 What is the VOCA Fix?

We join thousands of nonprofit organizations and government agencies in calling on U.S. Senate leadership to bring the VOCA Fix (S. 611) to the floor for vote.

Victims of Crime Act (VOCA) funding is in jeopardy. Millions of victims rely on the non-taxpayer source of funding for services to find safety, healing, and stability in the aftermath of abuse. The U.S. House of Representatives passed the VOCA Fix (H.R. 1562) with more than 90% of votes to sustain the Crime Victims Fund Act. Now it’s the Senate’s turn.

No, it’s a non-taxpayer sources of funding. President Ronald Reagan signed The Victims of Crime Act (VOCA) into law and established the Crime Victims Fund in 1984. Millions from federal criminal fines and penalties are deposited into the fund each year, and these dollars are granted to public and nonprofit service providers to provide supportive services for victims of crimes.

Why is a fix needed?

Deposits to the Victims of Crime Fund have declined in recent years — and it’s not because of a reduction in crime. A change to how crimes, particularly white-collar criminal cases, are processed is to blame. Increased use of deferred and non-prosecution practices has diverted millions from the Crime Victims fund this fiscal year.

Although resulting in monetary penalties, funds collected from deferred and non-prosecution practices are deposited into the General Treasury. It’s estimated billions of dollars that would’ve supported services for victims have not been deposited into the fund in recent years — only because of how the crimes were processed.

What’s at stake for victim services in central Kentucky?

Reduced deposits mean the Crime Victims Fund is not being replenished. Drastic cuts already have devastated many victim service providers. Without the VOCA Fix, organizations like ours could experience catastrophic funding losses.

VOCA funding supports the operation of our region’s 24-hour crisis hotline, 42-bed emergency shelter operation, safe exchange/visitation, and almost every advocacy service we provide for victims of intimate partner abuse. This is a crisis for victims.

The Senate can turn this around.

Follow the link above to the National Network to End Domestic Violence to send an email to your senators.

Looking for something to do this weekend? We sugge

We are honored to be one of the recipients of the

Our farm staff is already prepping for the upcomin

Embracing the peacefulness of the falling snow ❄

Just going to leave this here as a gentle reminder

To all of the many, many volunteers that have serv

Our monthly email for people who support survivors
Copyright GreenHouse17 2021